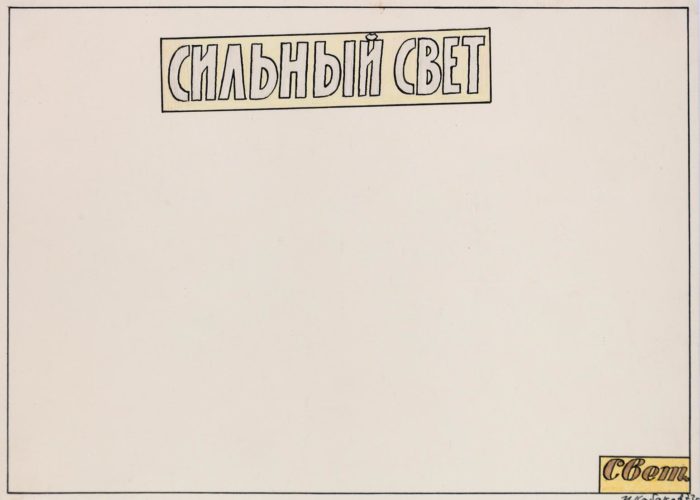 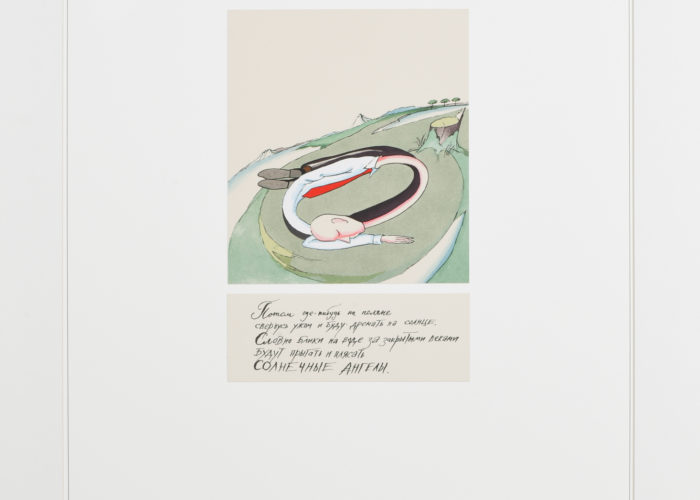 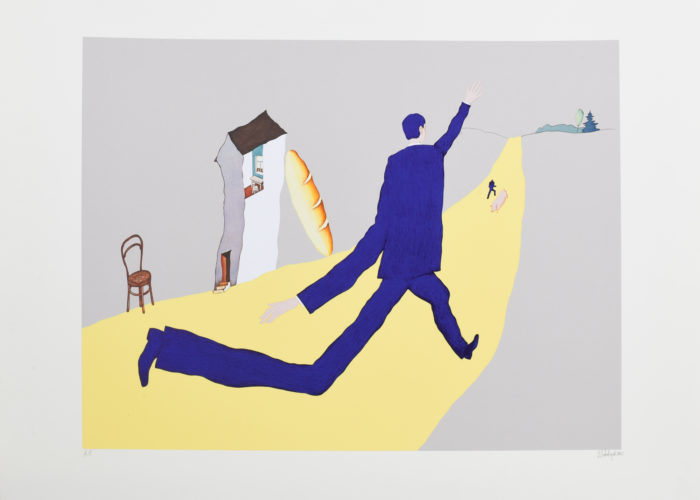 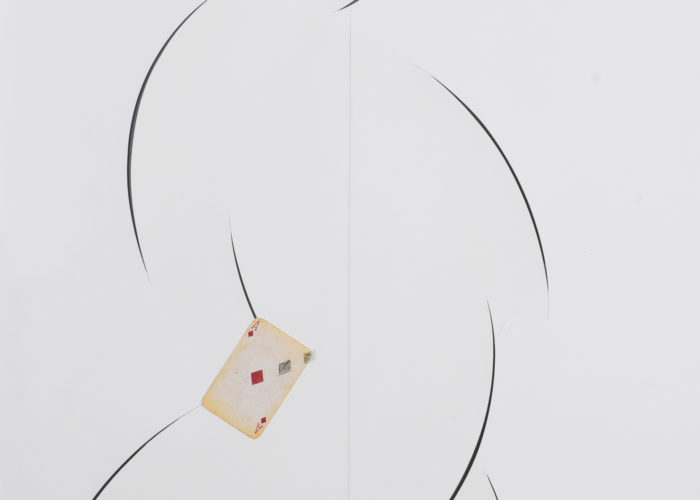 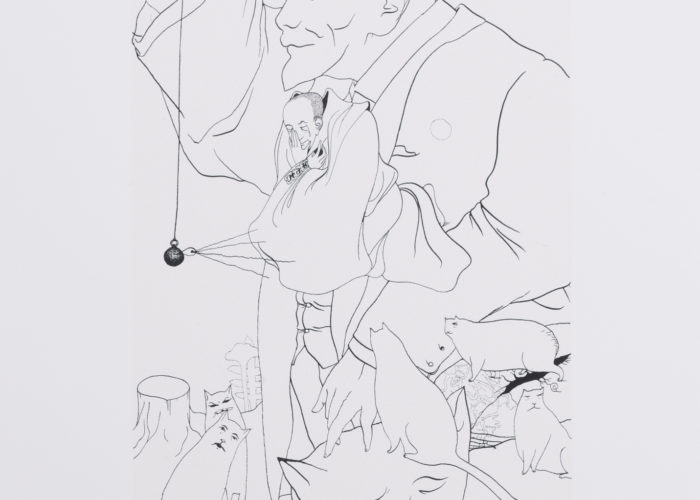 “In the Russian language, a picture is said to be written rather than drawn. This dates as far back as icons. Those masters who created icons were called “icon-writers” [ikonopistsy]. In other words, from the outset fine art was understood to mean the writing of a text, and you have to be literate to able to read such a text. You have to study the art of reading a picture. A school education is not required, as you can independently master this art. To do so, you need to put questions to the picture. And then you will see that it starts giving answers.”

The exhibition Long-Necked Being at the Inner Voice contemporary art gallery demonstrates the creativity of outstanding contemporary Moscow artists of different generations: Vladimir Nemukhin (1925-2016), Ilya Kabakov (born in 1933), Viktor Pivovarov (born in 1937) and Pavel Pepperstein (born in 1966). While these masters established themselves in different ways over three decades— from the “thaw” of the end of the 1950s to the “perestroika” of the late 1980s, they were all united by a conceptual approach to work characteristic of Moscow art, when it can be read as a philosophical text. In the 1990s, when Pivovarov and Kabakov had already emigrated from the USSR, all the four artists had gained international recognition and were perceived as living classics of national art.

The oldest of the artists – Vladimir Nemukhin, who died on 16 April 2016 – was one of the patriarchs of unofficial art in the USSR. Owing to his rejection of the principles of Soviet realist art, he was expelled from the Surikov Moscow State Art Institute. In 1956 Nemukhin was a member of the very first Moscow Group of the so-called “second wave of Russian avant-garde”, known as the Lianozovo Circle. In 1974 Nemukhin participated in the famous “Bulldozer Exhibition”. The artist’s works have been classified as a specific form of tachisme – abstract art in which traditional painting takes a back seat, while the substantive nature and texture of the works come to the foreground: in different periods Nemukhin dabbled in concave relief and spatial compositions. The leitmotif of Nemukhin’s works is the card game. Game theory was extraordinarily popular among the Soviet intelligentsia of the 1970s-1980s. It was developed at Georgy Schedrovitsky’s Moscow Methodological Circle, which included our philosophical elite: books such as Johan Huizinga’s Homo Ludens, Eric Berne’s Games People Play, and also works by Herman Hesse and Jose Ortega y Gasset on this topic were intellectual hits. Two works by Nemukhin were displayed at the exhibition on paper, executed in mixed media: Figure (Card Table) from 2013 and Mayakovsky’s Jack from 2014. The literary subject links Nemukhin’s creativity to a phenomenon that Boris Groys called “Moscow romantic conceptualism”, which originated in the capital at the start of the 1970s and shortly afterwards aspired to be the key self-replicating phenomenon of contemporary Russian art. “The history of post-war Russian art was formed in such a way that only Moscow Conceptualism could offer a system of representations that offered an alternative to official Soviet art and was capable of returning Russian art to the orbit of the international art world”, asserts the well-known curator Joseph Bakshtein. In conceptualism the idea becomes the key aspect of the work, which is de facto transformed into a text. It should come as no surprise that the representatives of this school gravitate to a graphic style in their works, thereby manifesting their propensity for contemplation.

The school of Moscow conceptualism was headed by Ilya Kabakov, who currently lives in Long Island. His exhibitions have been held in the world’s leasing museums; he is the most highly-valued living artist born in the USSR: in 2008 the Kabakov’s picture Beetle was auctioned off by Phillips de Pury for GBP 2.93 million. The three small works by Kabakov displayed at the exhibition and executed in 1973-1975 in ink and colour pencil on paper – Strong Winter, Clear Sky and Strong Light – relate to the “golden age” of the Moscow conceptual school and are close in terms of their “voice” to Zen philosophy talking about the concept of the “void”, which always attracts artists. Kabakov wrote: “The void is an unusually active ‘negative’ space, entirely focused and addressed to actual existence, constantly desiring to make it disappear into itself, sucking up and feeding on its energy.” In the first half of the 1970s Kabakov created 55 famous graphic albums from the series Ten Characters, cycles dedicated to the “communal” topic. The works of the artist in the album genre fluctuate on the verge of literature, illustration, works of decorative applied art and philosophical treatise. The three exhibited works were executed in the classical iconography for sheets from album cycles of iconography, when the artist starts using text in the space of the works. In these years Kabakov was close to another leading figure of Moscow conceptualism – Erik Bulatov, who is also known for using in his works texts that create a spatial semantic perspective.

It is at this time, at the start of the 1970s, that another close friend of Kabakov and leading artist of Moscow conceptualism – Viktor Pivovarov – wrote the pictures Long, Long Arm and Projects for a Lonely Person, which determined the spirit and style of his later works on show at the exhibition with the album of the lithographs Long-Necked Being (1983-2011) and Lithograph Long Leg (2011). “I like the word ‘long’,” says Pivovarov. I have Long-Long Hand, Long-Necked Being, History of the Long Nose. I think that behind this is the desire to somehow continue and lengthen time, oneself.” Pivovarov is a philosopher artist, who has created his own myth, a fabulous universal story with romantic motifs reminiscent of the German Biedermeier period. Like Kabakov, he infused the album genre with new life and illustrated children’s books: in the USSR work in the children’s area allowed artists to enjoy a freedom of self-expression unknown in other creative arts. Anyone who grew up at the time is familiar with the art of this master, if only due to the title of the magazine Happy Pictures that he drew from the figurines of merry little people. The artist has been living in Prague since 1982.

It can be said that Pivovarov’s son – Pavel Pepperstein – is an artist and writer (as co-author with Sergei Anufriyev, he wrote the cult novel The Mythological Love of Castes) at present without prior arrangement heads in Russia the Moscow conceptual school. In the 1980s, together with the Medical Hermeneutics group, he brought the tradition of Moscow conceptualism to new heights. Medical Hermeneutics made a material contribution to the theory and dictionary of Moscow conceptualism, which is characterised by hermeticism and invented symbolic language [zaum].

Pepperstein’s graphics stand out due to their refined psychodelia. Like in the exhibited lithographs of the album “Day” (1986-2012), they frequently shine light on the clandestine little nooks of the collective Russian-Soviet consciousness. If one accepts that Russian art is located in a space between the icon and iconoclasm, then it is clear that Moscow conceptualism gravitates to non-imagistic, which is illustrated by Pepperstein’s silkscreens from the 2001 series Empty Icons.